Videos from the latest concert

Thanks to +ko+ko+ and Paula for recording this snippets of the show.
Posted by Mind Booster Noori at 23:35 No comments: 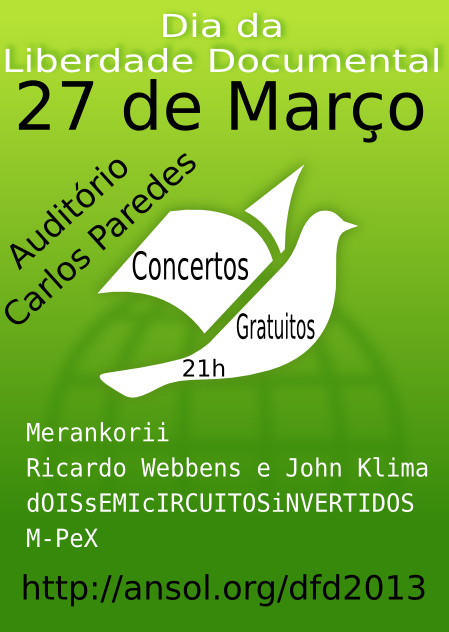 It is going to be already tomorrow, the second part of "Document Freedom Day"'s celebration in Portugal this year. After a day of contests and conferences, this Wednesday is all about free music. I'll be playing starting at 21:00 sharp, and I hope I'll see you there :-)

Like last year, at the beginning of 2013 a new compilation arrived: Each month, on the 20th of the month, a bunch of people from all kinds of places start making songs. And then they finish them, that same day! Why would they do that? It doesn't matter! The songs are great! Very often! This is generally what happens with "the 20th project". You record a song on the 20th of the month and send it in. The songs get brought together and sent back off to the people who created them, and everyone connects via song, hearing what everyone else came up with. Here's a selection of such tracks from 2012. We hope you enjoy them. This compilation contains contributions from Ridge Crowthorne (Australia), The Heavy Metal Experience Incident (Australia), Andy McClelland (Canada), Mystified (USA), kokori (Portugal), The Friday Project (USA), Soul Epidemic (Australia), Haru (Australia), +ko+ko+ (Portugal), Merankorii (Portugal), Vlayman (USA) and The Desks (Australia). The complete (free) album is here, but I'll leave you with the tracks from Merankorii and Kokori (a project that is 50% Merankorii). Oh, and speaking of projects, do you Qink?
Posted by Mind Booster Noori at 03:37 No comments: