Because it wasn't fair for you, Merankorii fans and believers, Merankorii just quited SellABand.A quick explanation: SellABand changed its Terms of Services. Each believer will have to cancel their account or accept them. If you (Merankorii SAB believers) agree with them, well, fine, but I don't want to incentive Merankorii fans to agree with a TOS that I don't agree myself. This is a part of what I said them about this issue:

I don't count on coming back to SAB as an artist until this [Terms of Services item number] 4.5 changes to something I feel more fair for me, as a band, to purpose to my fans, and I count to get back to being a believer *only*if* I find a band that I like so much that I'm willing to bet with my money in, taking into account that I might never see that money again

If you want to read the "complete version" of my stand on this issue, read what I wrote on my personal blog about it, and follow the links. Thanks for understanding.
Posted by Mind Booster Noori at 20:07 No comments:

Email ThisBlogThis!Share to TwitterShare to FacebookShare to Pinterest
Labels: sellaband

Bash and python got together in a loop, messed up with some devices and crypt functions. The result was compressed and spat into a floppy. The riddle is that the source code, while not available, is shown by the 9 minutes long music track itself. You just have to learn how to reverse engineer it… Or, at least, enjoy the resulting tune. The geekiest release ever from Merankorii is out now: grab this Cryptoloop! Packed inside handmade cardboard covers. Limited to 10 copies.

Released  at the 1st of February 2010, in three editions:

About the floppy edition: This is a *real* floppy disk. You'll need a 3 1/2 floppy disk drive or you won't be able to listen to this single. Yup, this sets the record as Merankorii's geekiest release ever ;-)

About the CD edition:
Besides the floppy, a CDr, with four different colors available. Purchasers of more than one of this packages get different colors. The CD includes the Cryptoloop track and a bonus track.

About the Package edition:
Each Package is different, and comes with 10 different items (expect most of them to be CDs), two of them being the Cryptoloop Floppy Disk and the Cryptoloop CD. Don't be afraid: no package will come with more than one Cryptoloop CD, unless you ask during the order. The market value of the items in the package is guaranteed to be more than the price of the package. 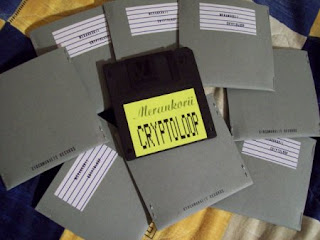 Orders can be done via e-mail, for now.
Posted by Mind Booster Noori at 09:13 No comments: